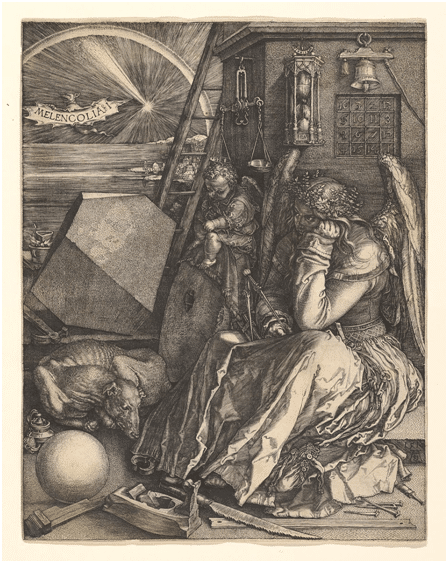 From a very young age, Durer’s father had introduced him to metalworking and drawing. This led him to apprentice Wolgemut, a famous Nuremberg painter. With time he began to travel, and his artistic career gradually began to boom.

While talking about the painter Albrecht Durer’s life story, it is vital to mention how he incorporated Italian and Northern European art to create astounding pieces of art. As a result, his excellence in woodcutting art, watercolor painting, and engravings got him fame.

You can learn all about Albrecht Durer artist’s interesting facts by looking at some of his famous works shared below:

The particular characteristic of the German artists of the Renaissance period is their eye for detail and accuracy. In addition, Durer loved to observe nature, mainly because he painted the Young Hare. The painting reflects Durer’s belief that animals are worthy of being a part of art.

The technique that painter Albrecht Durer used is a mix of watercolor as well as the body color. When you pay close attention to the eyes of the hare, you see a reflection of the window in his eyes; probably that is the window of Durer’s studio or simply an example of the technique he used. He often used this technique to add strength to his subjects. Along with this, fine whiskers and the texture of the fur all contribute to the realism in the masterpiece created by Durer.

While mentioning the facts about Albrecht Durer, it would be correct to look at how his profound intellect and introspection got him into a depressed state. His work Melencolia is a self-portrait where the artist showcases his psychological state. The image, however, delivers the idea of paralyzed imagination because of constant introspection.

The painting showcases a figure drenched in despair. You can also see the tools scattered here and there. The figure is instead that of a female, while many consider it a male. The painting shows flight with tiny wings and strong muscles, something too difficult for a heavy body and tiny wings.

Since Albrecht Durer’s drawings reflect the renaissance techniques, the painting also demonstrates chaos while depicting Renaissance melancholy. The female looks frustrated because of her incomplete tasks and duties. The artwork leaves the viewer confused because we neither know the setting of the painting nor do we understand the meaning behind the differently positioned objects.

The Witch Riding the Goat Backwards

It was thought that witchcraft could reverse the natural order. Therefore, the painting showcases the hair of the witch in one direction, whereas the goat and its trail in the other direction. Hans Baldung, one of Durer’s pupils, mentioned people’s fascination with witchcraft, especially during the eighteenth century. This inspired Durer to create this painting.

The engraving shows a witch sitting backward on the goat, tightly gripping the horn with one hand and her broomstick with the other. You see her hair flying away and a hailstorm coming. Witches were considered to cause destruction. You also see a ring-shaped below that is symbolic of embodying the devil.

The painter Albrecht Durer was 28 when he painted his self-portrait. The artist projects a detailed description of his hair and the coat painted along the dark tones of brown and cream. However, what made the Self-Portrait famous is its similarity with Christ.

In a letter written by the Roman official Lentulus, he described several physical features of Christ. For example, it talks about bright eyes and hazelnut hair, something similar to what you see in the Self Portrait created by Albrecht Durer artist. The identity of Christ is further evident from the fact that a similar resemblance is seen in the artworks of great artists like Leonardo da Vinci.

This painting reflects the artist’s observational skills that tell you more about Albrecht Durer and represents his ability to depict human figures’ facial features accurately. Durer’s painting technique for drawing Self-Portrait was a style dedicated explicitly to Jesus Christ. At first, there was no commotion when the portrait was released.

Later it became famous, and several others considered it a blueprint for creating religious portraits. Later on, with more attention to detail, it was considered an act of blasphemy. Even though there is symbolism for religious iconography or not, Durer’s Self-Portrait remains to be an excellent composition of a beautiful piece, and we are not sure how it represents the painter Albrecht Durer’s life story.

There is nothing new about the story of Adam and Eve that needs an introduction. Yet, Durer decided to create Adam and Eve in 1504, bringing out his artistic innovation in front of us. We see Adam and Eve standing together in a dark, spooky forest, far away from the garden. The nude figures are carefully painted with details aligning symmetry, and the angles of hands and legs show balance.

While Adam holds on to a branch, we see Eve plucking an apple. We see several animals all around the picture. More than the story of Adam and Eve in Genesis, there is a lot about the Germans, the Renaissance, and the artist himself that the painting coherently delivers that ultimately got it the recognition it deserved.

After Durer returned to Nuremberg, he complained about weakened eyesight. Soon, he would work less as an engraver; instead of engraving, much of his work started to be printed. As his health began to deteriorate, he passed away in 1528. However, he is still remembered, whereas his woodblocks and engraved plates continued to be necessary for art for several centuries.

5 Things You Need to Manage Diabetes

Who Invented Walking? When And How Was Walking Invented?